Submitted to the Government of Lao PDR (GoL) in early February 2018, “The Master Plan” was developed by the Natural Heritage Institute (NHI) and a team of international experts to assist the GoL in implementing its Policy on Sustainable Hydropower Development that was decreed by the Prime Minister on January 12, 2015.  The Master Plan has the potential to meet the country’s energy goals and preserve the last intact remnant of the Mekong River.  NHI focuses on the Xe Kong tributary because of its irreplaceable fishery value and contribution of sediment all the way to the Mekong Delta.  Up to 81 migratory species of fish and the livelihoods of millions are under threat from Lao’s hydropower development plans, including 7 large dams that are proposed for the mainstem of the Xe Kong.  The Master Plan provides an alternative development scenario that would allow flushing of sediments and maintain a flow pattern conducive to the needs of the migratory fish.  It also includes a solar/hydro hybrid alternative that would eliminate the need for new dams. The Master Plan has been endorsed by the Prime Minister of Lao through two official directives (dated 16 February 2018 and 13 August 2018) to the relevant line ministries to adopt and implement the findings and recommendations of NHI’s Master Plan as the basis for further hydropower development for the entire nation. 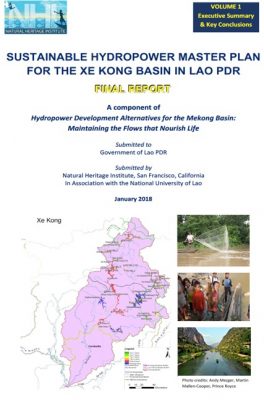 Today, the mainstream of the Xe Kong tributary is the last undeveloped major tributary in the Mekong River Basin, and its natural function remain unimpaired down the mainstream Mekong, through the Cambodian floodplains and the Tonle Sap Great Lake through the Vietnam Delta, to the South China Sea.   However, there are currently seven hydropower dam sites on the Xe Kong that are being actively studied and the lowest six are located right in the prime migratory fish spawning habitat of the mainstream river. The lower reach of the Xe Kong River is characterized by a high level of fish biodiversity, amounting to 175 species, including ~81 migratory fish species. Fifteen species are exclusive to the Xe Kong River; they are neither found in any other Mekong River tributary nor anywhere else in the world. Many of these species must migrate upstream to spawning areas. Completing these migrations require unobstructed passage upstream, as well as the capacity for adults, larvae and juveniles to migrate or drift downstream. The livelihood benefit of the fishery resource, in terms of nutrition, income and employment, is crucial, particularly for rural poor, who have few other livelihood options.

The Xe Kong is also the most important remaining source of sediment contributions to the Mekong Delta in Vietnam.  According to the IPCC, it is one of the three major delta systems in the world most vulnerable to sea level rise, with its attendant storm surges and salinization.  The resilience of the delta to the effects of climate change depends directly on this annual replenishment of sediment.  This delta is home to 18 million people, produces half of the rice harvest for Vietnam, the world’s second largest rice exporter, and the epicenter of fish harvesting and biodiversity.  The sediments coming out of the Xe Kong basin also nourish the food chain in the Tonle Sap Great Lake.

The degree of impact that the potential Xe Kong dams and reservoirs would cause to migratory fish, due to both the barrier they pose to fish migration and to the inundation of riverine spawning habitats, depends on their size and, most important, their location. The further downstream the dam, the more impactful it would be. The lower six would create an absolute barrier to fish migration as it is not feasible to engineer fish by-passes around these large dams, and each would create impoundments that would inundate these habitats. The combined effect would be to turn what is now a river ecosystem into a series of lakes which would not sustain the hundreds of migratory species that require these habitats to survive.

NHI was asked by the Ministry of Energy and Mines and other relevant agencies of the Government of Lao to advise it in implementing the new Policy on Sustainable Hydropower Development, decreed by the Prime Minister on January 12, 2015, by creating a “Master Plan” for hydropower development in the Xe Kong basin. Neither the Policy nor its implementation guidelines provide substantive standards or criteria for determining the sustainability of proposed hydropower projects.  Therefore, an early step in preparing the Master Plan was to identify a set of attributes of sustainable hydropower that are based on measures to counteract the main environmental impacts that hydropower dams inflict on the natural functions of river.  The Master Plan presents an alternative development scenario that focuses on opportunities for:

The alternative sites are not accessible to migratory fish because they are above existing barriers (already constructed dams in the Xe Kaman tributary) or so far up in the catchment that the fish visitations are relatively minor.  In the aggregate, they would provide enough power to replace the proposed mainstreams dams. A key element of this alternative scenario is the augmentation of power output at the largest of the existing hydropower dams in the basin, the Xe Kaman 1 Hydropower Project, owned and operated by Viet Lao Power Joint Stock Company (a Vietnamese Company).  This 290 MW facility is ideally suited for deployment of floating solar photovoltaic panels that would be fully integrated with the hydropower powerhouse and operated as single unit (see the map for location).  This is because the reservoir is very large and shallow; it can store more than a year of inflow which gives it great operational flexibility to counteract the daily fluctuations in power output from solar panels; it has excess transmission capacity that can facilitate the solar component; and it has a smaller reservoir immediately downstream, which is owned by the same company, that can re-regulate the flow distortions from Xe Kaman 1 when operated in this manner.

Modeling was conducted to ascertain the optimal scale for the solar component and how the hydropower reservoir would need to be operated to buffer the fluctuations in the solar generation.   The NHI team looked at scales ranging from 150MW-400MW-500MW-to ~1200MW (which would represent covering 15% of the reservoir area with solar panels).  This alternative would avoid negative impacts of developing new hydropower, while approximately doubling energy output, improving firm power reliability, reducing GHG emissions – as much as 357,000 tons per year (for a 280 MW facility, according to solarmango.com), and greatly reducing financial risks to the investors. Also, the floating solar technology can be brought on line much more quickly than any other alternative, and the costs of such systems have decreased rapidly over the past decade and further cost decreases are likely. Present costs of $1,000/kW for floating systems are likely to reduce to $900/kW over the next decade.

The Master Plan also includes an implementation strategy.  It modifies the respective roles of the hydropower developers and the GoL with respect to the selection of sites, designs and operations of future hydropower facilities. Today, those decisions are made by the developers with minimal oversight by the GoL.  Under the Master Plan approach, the GoL itself would conduct a study, illustrated by the NHI Master Plan, to determine in advance the sites, designs and operations that best benefit the people of Laos and the downstream neighboring countries over the long term.  This would include a programmatic environmental and social impact assessment.  These projects would then be offered to developers to submit competitive applications to undertake full-fledged engineering and economic feasibility studies and a project-specific environmental and social impact assessment.   The GoL would select the winning bid on the basis of capabilities and performance record of the developers rather than on the price point.  Developers who win a MoU and show that the project is feasible would have an exclusive right to a concession agreement to build, own, operate and then transfer the project to the GoL.

The major recommendation of the Master Plan is to defer any commitment to the mainstream Xe Kong dams and pursue instead the sustainable options in the rank order in which they are presented in the Master Plan, with the solar augmentation of existing reservoirs as the top priority.  If there comes a time when additional power development from the Xe Kong basin is needed, the uppermost dams should be given a higher priority.  The lowermost dams should not be developed under any circumstance because of their very large impacts, including blocking passage of migratory fish and sediment to the Mekong Delta.

The full Master Plan and the associated Implementation Plan can be downloaded here.