Under a Memorandum of Understanding (MoU) executed on the 20th of October 2014 with the Ministry of Mines and Energy of the Royal Government of Cambodia (RGC), NHI was tasked with assessing the siting, design and operational of alternatives to the originally proposed Sambor Hydropower Dam on the mainstream of the Mekong River and also a no-dam alternative for power generation. The 2600 MW project would be the largest hydropower dam constructed on the Lower Mekong and it would create a complete barrier to migratory fish that are a valuable source of protein and income to people in Cambodia, and block sediment that replenishes the Mekong Delta and nourishes the food chain of the Tonle Sap Great Lake.  This exacerbates climate change impacts, such as sea-level rise, and reduces the region’s ability to build resiliency.  NHI’s Sambor Alternatives Assessment, which was submitted to the RGC in December 2017, developed a set of environmental performance standards (e.g. max fish survival and sediment passage) selected to maintain the natural functions of the Mekong river system, and then considered how a major hydropower facility could be sited, designed and operated to achieve those standards while maximizing power production and maintaining economic viability. 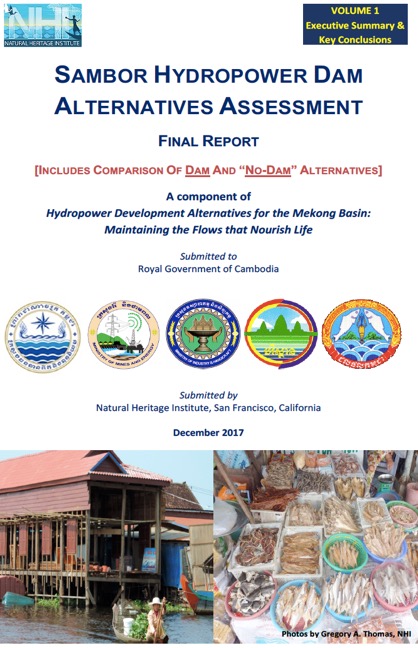 The Sambor dam, proposed by the Government of Cambodia, is probably the largest and most destructive dam in the Mekong River Basin. It is slated to be located on the mainstream between the confluence with the 3-S basin (Se San, Sre Pok and Se Kong rivers), which is where migratory fish reproduction takes place, and the Tonle Sap Great Lake, the most productive freshwater lake fishery in the world. The original Sambor Dam would be 2600MW, twice as large as any other dam constructed or planned for the mainstream of the Lower Mekong.  It would be 18 kilometers wide, 33 meters high (from tailwater to maximum storage level) and create a reservoir 82 kilometers long.  The dam and the reservoir would create a barrier that would be devastating for the migratory fish stocks that move from the Tonle Sap Great Lake to the spawning grounds upstream and in the 3-S tributaries.  The reservoir would disrupt the reproductive cycle because the eggs, larvae and frys would not be able to drift back downstream through this long static pool.  Furthermore, fish passes are ineffective on dams higher than 30 meters.  At least 86 species are long-range migratory species in the Cambodia part of the Mekong River, and all would become endangered by a Sambor dam. Irrawaddy river dolphins, which are critically endangered, also use the Sambor corridor for refuge and breeding grounds.  Dam construction at or near Sambor places the remaining 80 dolphins at high risk of extinction.

In addition, the proposed Sambor Dam would capture all of the bedload and 60% of the suspended sediments that are needed to maintain and replenish the Mekong Delta in Vietnam, which according to the IPCC is one of the three major delta systems in the world most vulnerable to sea level rise, with its attendant storm surges and salinization.  The resilience of the delta to the effects of climate change depends directly on this annual replenishment of sediment.  Replacing the dams slated for the Xe Kong mainstream will keep the intact portion of the Mekong River System free-flowing all way to the sea if, but only if, the Sambor Hydropower Project on the mainstream is redesigned. This dam could literally kill the Mekong River and devastate Cambodia’s economy and food security. 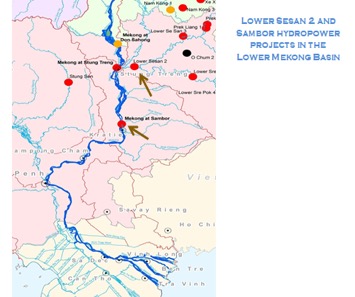 The starting point involved reversing the usual process for conducting hydropower dam pre-feasibility studies in which the first step is optimizing power output at a particular site, and then assessing impacts and adopting mitigation measures.  In that sequence, the mitigations measures are intended to accommodate the power production.  In the NHI method, the team first established a set of standards to preserve the health of the natural and social systems, and then considered how a major hydropower facility could be sited, designed and operated to achieve those standards.

In terms of hydropower projects, NHI studied 10 alternatives sites, designs and operations to the proposed Sambor Dam that will keep the river free-flowing, maintain 95% survival of fish moving upstream and downstream through that corridor, and discharge virtually all of the sediments and nutrients into the Tonle Sap Great Lake and the Vietnam delta. The one most able to attain the performance standards is called Sambor Alt_7.  This would be the most fully mitigated major dam project ever conceived—no current hydropower dam operating today could meet its specifications. The site would be 13 km upstream of the original Sambor dam in an area with multiple channels, which would allow others to be free-flowing for passage of fish and sediment, and potentially also the Irrawaddy river dolphins.  The dam would include three fish passage facilities, gates to periodically flush sediment and utilize the most advanced turbines currently under development to avoid fish baurotrauma.  It would be operated to maintain a constant minimum flow sufficient to keep the eggs, larvae and frys in suspension all the way through the reservoir to the point of discharge at the powerhouse or spillway during all times of the year.  This analysis defined the permissible size of the project and its power output.  The installed capacity would decrease from 2600MW for the original Sambor dam to 1240MW for NHI Alternative 7.

Even this alternative poses substantial risks to the extraordinary resources of the Mekong due to the large remaining uncertainties regarding the function of the migratory fishery (all with distinct lifecycles and behaviors), and the untested performance of these advanced mitigation measures. The NHI team also assessed the consequences for fish yield in the event that these measures fall short of the 95% survival aiming point.  The results show that a level of performance that reflects the historic global experience would devastate the fishery!  For this reason, the NHI team sought and obtained from the chief Minister for Hydropower Development a modification to the MoU to authorize a comparative study of a no-dam alternative, based on solar power, that promises to outperform the Sambor Dam alternative with respect to power output, cost, reliability and avoidance of financial risks.

The concept devised by the NHI team is to augment the power output of existing hydropower facilities instead of building a new one at the Sambor site.  The project most promising for that is Cambodia’s largest existing hydropower facility, the Lower Se San 2 (LSS2), which is owned and operated by the same investors interested in the Sambor project.  This 400 MW project is located at the confluence of two of the 3-S tributaries, the Se San and the Sre Pok, and was commissioned in November, 2017.  The concept involves siting floating solar photovoltaic panel on the LSS2 reservoir and integrating them into the operations of the hydropower project itself, so that they would operate as a single, hybrid facility.

To assess whether the increase in power could be viewed as an alternative to the Sambor dam, the NHI team considered whether it could be comparable or superior to even the most fully-mitigated Sambor Alternatives (Sambor Alt_7) with respect to the primary consideration factors from the vantage point of the national government, the investors and the grid operators (which are the power customers): reliability of power output, cost, power output, time for deployment, avoidance of financial risk.  Furthermore, siting the solar alternative at LSS2 would imposes no further impacts to the Mekong fishery, nor contribute any additional sediment loss to the downstream system.  No additional people would be displaced from their homes.  An important added benefit is climate mitigation by reducing GHG emissions: a 280 MW facility can reduce as much as 357,000 tons per year (according to solarmango.com).

The final recommendation to the RGC is that it should defer any commitment to a Sambor Dam while it pursues better alternatives, starting with the solar augmentation of existing reservoirs.  Even the most fully mitigated alternative poses high risks.  The solar alternative allows the RGC to defer making any commitment to a Sambor dam at this time.  If, at some time in the future, Sambor Alt_7 emerges as the least cost alternative for meeting the next increment of demand, it can be reconsidered.  However, if all costs and benefits, including the risks to natural resources are weighed in the balance, and if the cost of solar and other renewables continues to decline as expected, that day may never come.

The final report of the Sambor Dam Alternatives Assessment can be downloaded here.